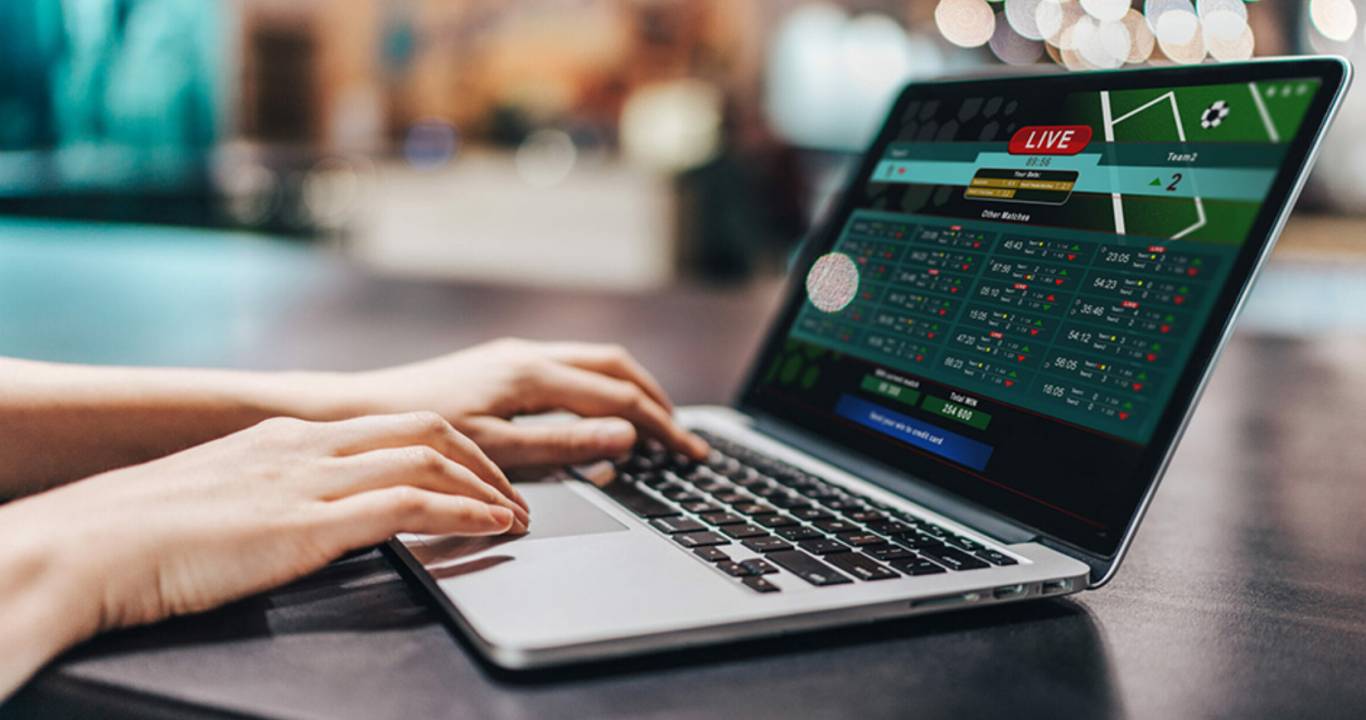 The abundance of various bonuses and promotions offered by modern bookmaker companies no longer surprises anyone. There are plenty of rewards for both new and existing clients, so there is always a great chance to earn more. To not get confused and receive the maximum benefit, study the best promotions of the top bookmakers, which are valid until the end of April. You can get good bonuses, and there is enough time to fulfill not the most challenging wagering requirements for them.

The reliable bookmaker 1xBet is considered one of the market leaders in terms of various indicators. The promotional campaign is one of them because few brands can boast of such offers. It is worth highlighting permanent ones, but temporary promotions also bring a lot of benefits to the clients of this bookmaker’s office. The table below highlights the top offers of April.

Only adult and registered customers can participate in all the above promotions. You will also need to replenish your account in any convenient way. Luckily, the bookmaker offers enough of them.

General rules: The company has the right to change betting conditions, as well as suspend or terminate any of the promotions. It is forbidden to violate the rules and cheat. Therefore, you should carefully study the rules and requirements of the office to get the most out of its offers.

Let’s briefly view what prizes are available in the above promotions. 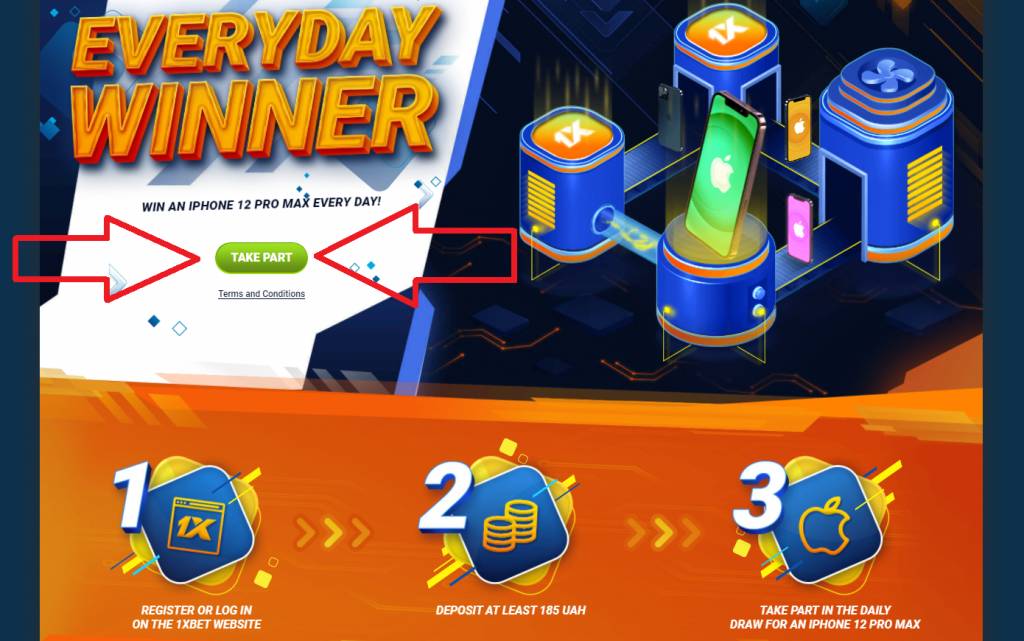 In the Everyday Winner draw, there is a chance to win a brand new iPhone 12 Pro Max every day, as well as numerous promo points that will allow you to buy great gifts in the Promo Code Showcase.

The profitable Everyday Winner promotion will definitely appeal to the company’s customers because the brand new iPhone 12 Pro Max is one of the best gadgets now. To join the drawing, you will need to follow these simple steps:

The bigger the deposited amount is, the higher your chances of winning are. Detailed information, which indicates the number of tickets corresponding to the deposited amount, can be found on the company’s official website. Prize money is shown in the table below.

Rules: Only registered customers who have filled out a questionnaire in their personal accounts, verified their mobile phone numbers and email addresses can take part in the promotion. The number of deposits and tickets is not limited, and the drawing for the current day is held on the next one. 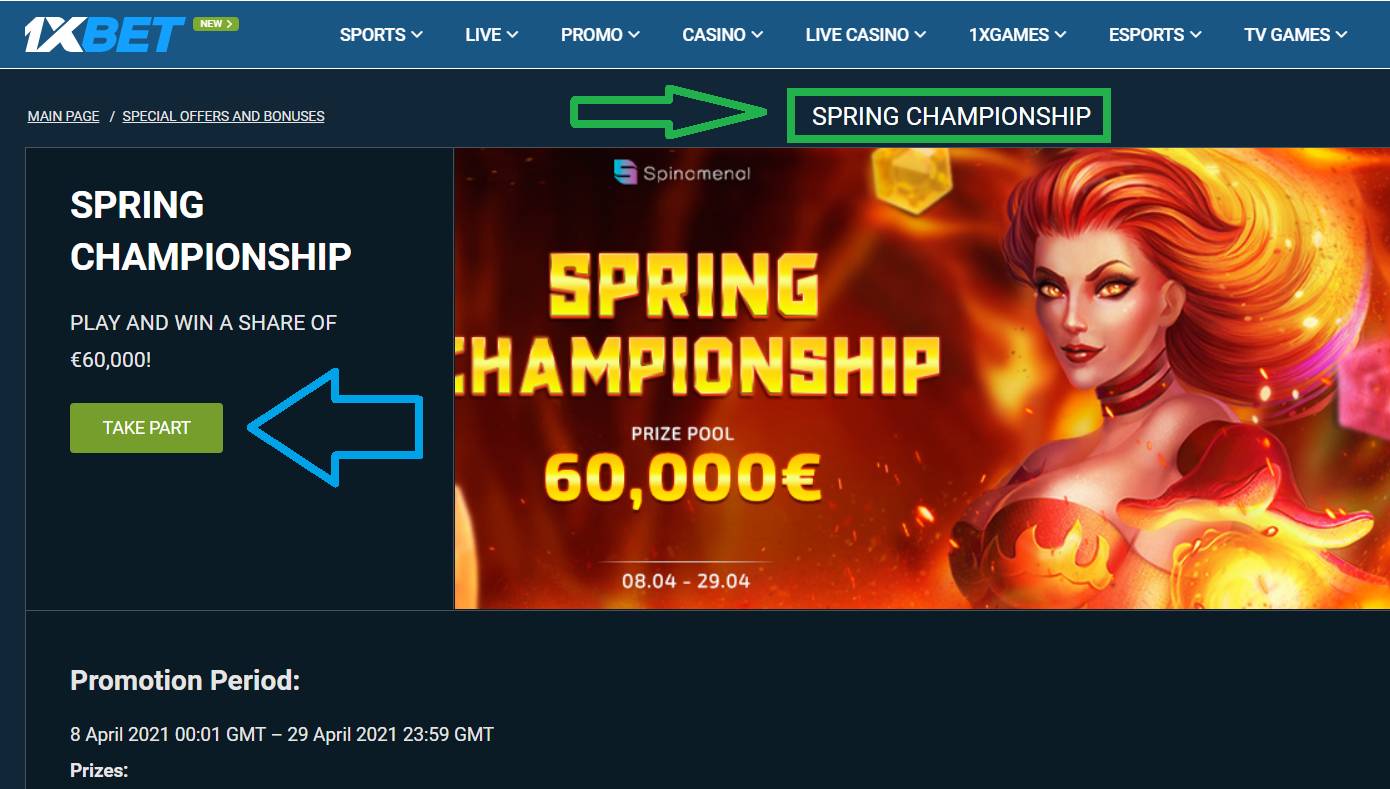 The Spring Fever offer has a prize pool of $2400. Each draw can be won by 30 players at once. The top prize for first place is $550. Players in the second and third places of the rating receive $450 and $360, respectively.

Thanks to the Spring Fever promotion, you can try various high-quality slots, plus there is a chance to win good cash prizes, which are indicated in the table below.

To take part in the promotion, register or login to the platform and play the following games:

The key principle of the promotion is that players receive a special number of points in accordance with the amount of the bet when playing on the above slots. The minimum bet size is $0.5.

Rules: You can confirm your participation in the drawing on the special page of the promotion. All prizes are credited to the balance within three working days after the end of the promo offer. If according to the results, there are two or more winners with an equal number of points, the winner is the one who scored them the fastest. The draw doesn’t accept bets placed with bonus funds.

Draw of $4850 in the “Mystic Heroes” promotion from 1xBet 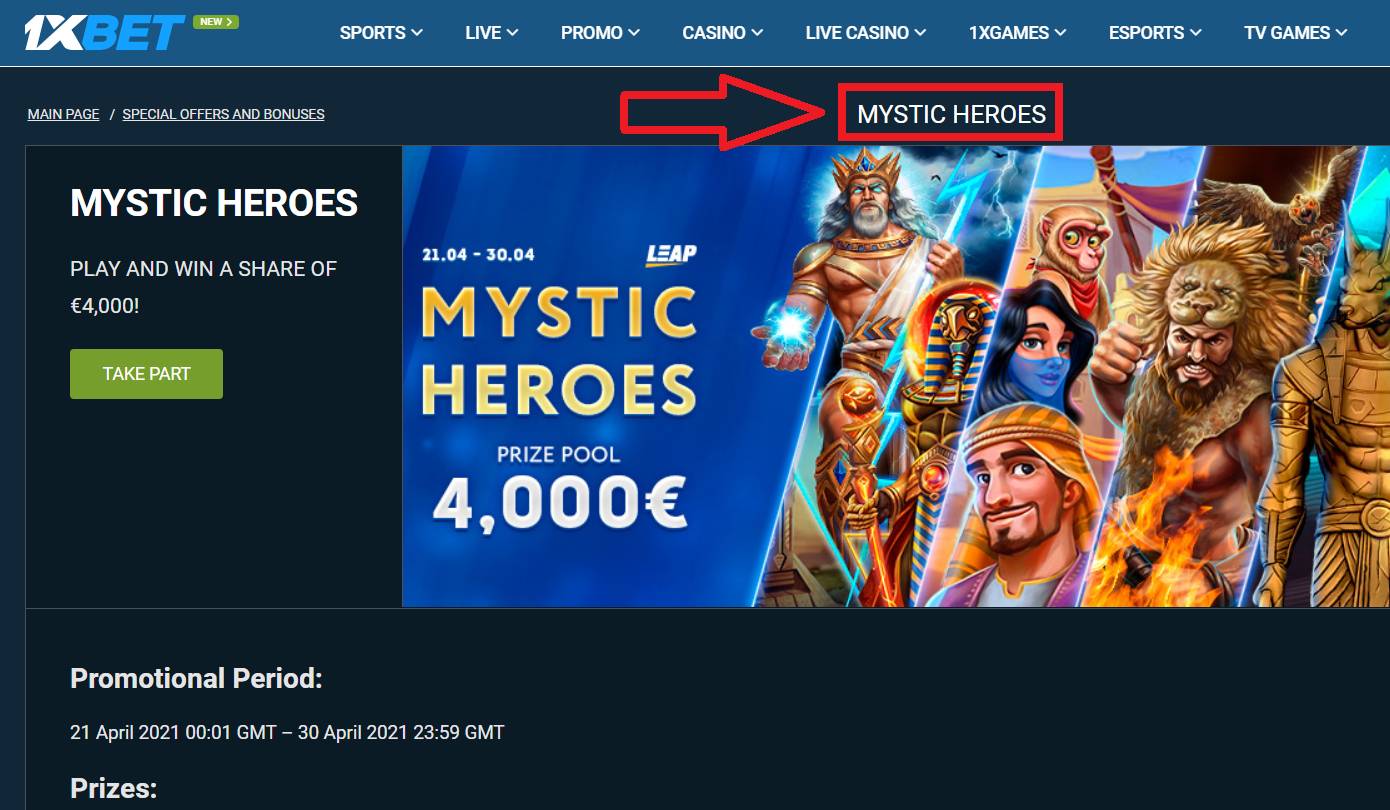 One of the most interesting and profitable promotions is the Mystic Heroes. The total prize fund of this offer is almost $4850. The winner can win up to $1200, while second and third places win $970 and $725, respectively. Also, players from the 4-20 places get nice rewards.

According to its terms, you should play Wild Gods, Hercules Do or Die, Secrets of the Nile, and Ali Baba’s Gold. These are popular slots with a high percentage of return, so you will be able to enjoy the process, earn money and participate in an excellent promotion. For every $1 won, the player is awarded 100 points. The current results can be viewed on the promotion page, and the possible winnings are indicated in the table below.

Rules: Only real money bets are taken into account when calculating the results. Bonus funds are not taken into account. As in other promotions, if at the end of the promotion there are several players with the same number of points, the winner is the one who scored them the fastest.

Top promotions at Betwinner in April

The excellent betting company Betwinner has many profitable offers for its clients. In April, the brand pleased the players with generous Spring Championship and Mystic Heroes promotions. The prize fund of the former drawing is $72600, the prize pool of the latter one is $4850. These are impressive rewards that deserve players’ attention.

To take part in both promotions, you must agree to their terms and conditions, confirm your desire on the special page, and play only on those qualifying slots indicated in the requirements.

General rules: Both promo offers are eligible for bets placed with real money only. Customers should also study their rules and requirements, after which they will need to agree with them. If the fact of attempted fraud or violation of the rules is discovered, the company has the right to refuse the player’s participation and cancel all their achievements. If a fraud is discovered after the prize has been issued, the client’s account will be blocked. Also, the bookmaker has the right to change the conditions of the promotions, suspend or completely cancel it at any time, and this will not contradict the rules, as well as principles of the fair play.

Traditionally, in the spring, Betwinner tries to please its customers with interesting offers. The Spring Championship is a very generous promotion that has no complex requirements and consists of three stages, each of which has a total prize fund of $24200:

All points earned are summed up for a specific period. If several clients scored the same number of points at once, the winner is the one who did it faster than the others. The distribution of the prize money is shown in the table below.

But that’s not all, because the total prize fund is distributed among all other players up to 150th place. It is indicated in the table below.

This is a great chance to win more by fulfilling simple conditions.

Rules: All prizes will be credited to the main customer’s accounts within three business days after the end of the promotion.

To take part in the “Mystic Heroes” draw, you need to register and replenish your account or log in to the bookmaker’s website. Next, go to the promotion page and click on the “Participate” button. Only in this way can clients confirm their intention and automatically agree to the terms and conditions after activating the offer. The draw is held until April 30th, and the distribution of prizes is shown in the table below.

The following slots take part in the promotion:

Rules: Every dollar won is automatically converted into 100 tournament points regardless of the game you choose. Other slots don’t take part in the promotion. However, the company has the right to change the conditions of the tournament at any time. Also, the bookmaker can suspend or cancel the drawing altogether.

Only real money bets are taken into account when calculating the results. Bonus funds don’t take part in the promotion. When several players have scored the same number of points, the winner is the one who did it faster than the others.

The Hollywoodbets company is actively involved in various temporary promotions. The top offer at the moment is the Free DStv offer for a monthly competition. Each participant has the right to receive a certain part of the total prize pool ($1400) in the form of DStv payments. You can also earn $70 one-time for your activity. There is not much time left until the end of the promotion, so it is worth playing and winning now. The draw will end on April 30th, 2021.

Free DStv by Hollywoodbets for a month! 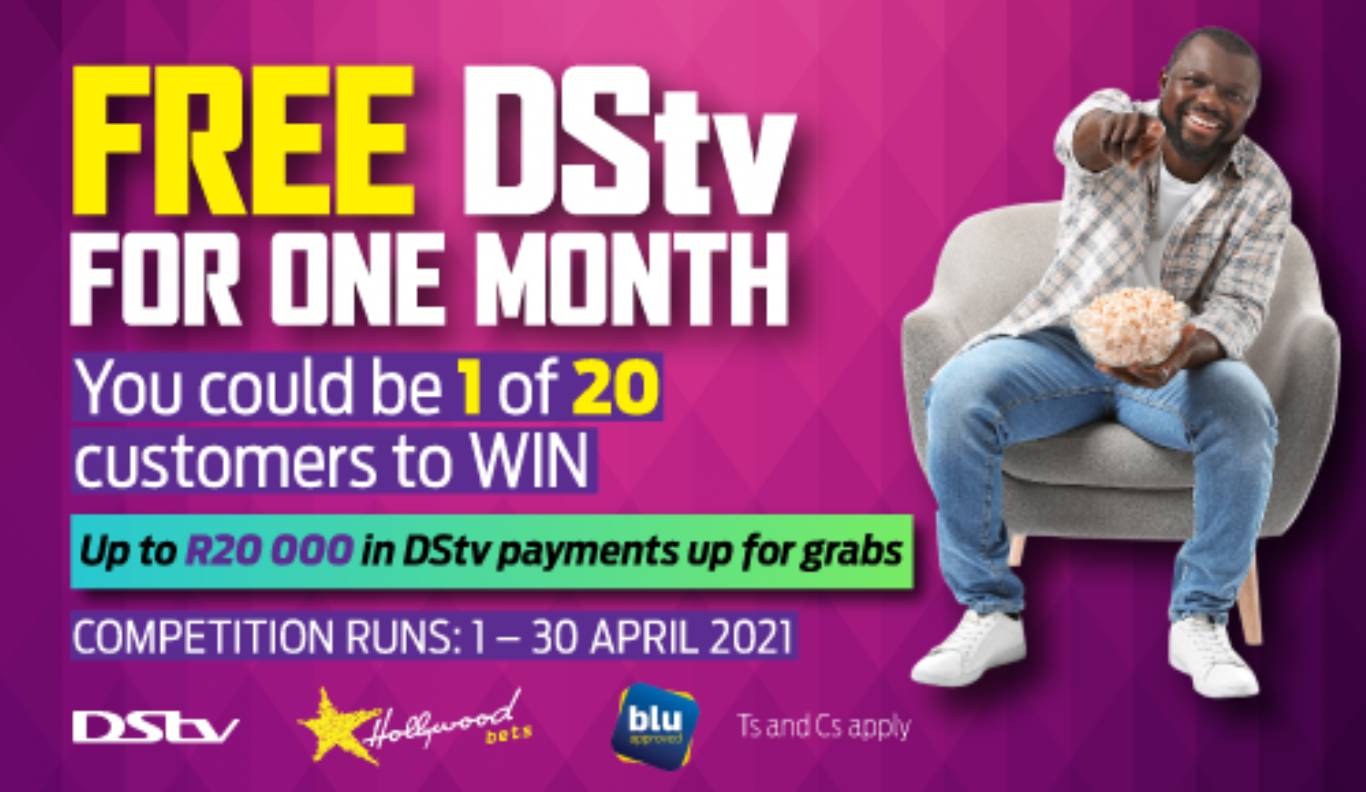 Hollywoodbets’ generous April promotion will please all its registered customers. To participate in the drawing, you will need to replenish the DStv balance by any amount in one of the offices of the bookmaker company. The operation must be confirmed by sending an SMS to the phone number 45294 with the text of the message: “DStv” + your game account number.

Only adult clients are allowed to participate in the promotion. Important conditions of the promotion include:

Rules: All winners will be determined on May 3rd, 2021, and notified by phone. For the entire promotion period, the bookmaker has the right to change its conditions and make certain changes. Also, the company can stop the promotion at any time, which will not contradict the rules.

All the above promotions are very profitable and have generous prizes. Therefore, it is worth registering at a suitable bookmaker company and making the most of it.

The popular betting company 1xBet continues to delight its customers in the new year….

The generous betting company launched a beneficial Champions League campaign on November 26. By…

Time For Prizes: the awesome prize drawing by Betwinner 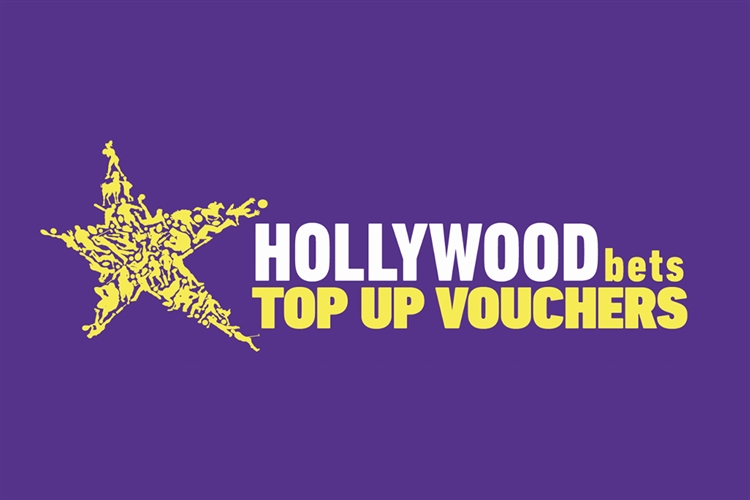 Check all the information about the top bookmakers on our website. Here is our pick with the best bonuses and promo codes.

Betway
Register and get R25 Sign Up Bet!
Bet now
3

Learn the information about the best betting sites, which work worldwide and in Africa. Here you will find the reliable and time-tested online bookmakers offering to bet on different kinds of sports, e-sport, horse betting, and other events.